These days, though, your average minivan throws down 250 ponies and still gets nearly 30 highway MPG. Meanwhile, muscle cars like the Camaro ZL1 routinely deliver 600+ horses, and supercars are converging on the magic 1000 figure. These numbers would have boggled the mind not long ago — and likely would have caused poor Mr. Benz, whose motor wobbled out just two-thirds of a horse, to burst a mental gasket.

It’s clear that we’re in a golden age of engines. And that’s great news. Because who doesn’t want more power? Or more efficiency? Or both? The more great mills that are produced, the greater the chances that one will find its way into a budget-minded enthusiast’s heart… and driveway.

Which got us to thinking, what are the very best engines to be had in cars that most anyone can afford? The Klipnik brain trust gathered recently to hash it out. We gave ourselves just two simple rules: 1) keep the picks from within the last 25 years and 2) make them choices that can easily be attained for less than $25,000 — preferably much less.

Here are the ten exceptional motors that made our list (in alphabetical order by automaker). A 3.0-liter straight six spinning out 240 horsepower may not sound like much for an “M” version of a BMW. But as with many Bimmer engines, the S52 punches well above its weight, delivering performance (e.g. mid-five-second 0-to-60 mph blasts) that makes you wonder what they feed those German horses. Available in the E36 M3 and in earlier versions of the Z3-based M roadster and M coupe, this engine delights enthusiasts not only with its swift acceleration, but also with its refined, willing nature and captivating soundtrack.

And because it’s considered to be the “lesser” of two very sweet M motors of the era — the other being the S54, its potent younger brother — the S52 is also a downright bargain. Consider that an S52-equipped M roadster (up through the 2000 model year) is usually 30-40% cheaper than the same model with the later S54 engine (2001-2002 model years). Introduced in the 2011 Mustang GT and bringing back the “5.0” badges to the ‘stang’s front fenders, this mill makes nearly double the power of the Fox body-era five-point-oh that Vanilla Ice rapped about. Specifically, the Coyote’s output started out at 412 horses and got bumped up a bit as the years went on. A modern 32-valve, variable valve timing design, it provides the expected muscle car kick off the line yet doesn’t run out of breath at higher rpm like its forebear did. Its addictive V8 sounds, power and torque will have you running up and down through the entire rev range just for the fun of it.

It should be noted that our enthusiasm is tempered, if slightly, by multiple reports of “ticking” sounds coming from the engine, often immediately after its first scheduled oil change (see this thread for details). Worse, despite sometimes concerted dealership service tech efforts, the ticking issue, once it begins, never seems entirely to go away.

If that concerns you, you may want to skip to a different engine on our list. Or employ our preferred solution, which is simply to mash the gas pedal and revel in the V8’s majestic soundtrack. GM’s versatile 5.7-liter LS1 V8 cranks out anywhere from 305 to 350 hp and enough torque to set you back in the seat with a mere nudge of the throttle. A rumbling exhaust adds to the fun, and it’s also surprisingly fuel efficient on a road trip, able to knock down mid-high 20s MPG when cruising on the highway. Both of these are versions of a hyperactive, naturally-aspirated inline four that saw duty in Honda’s stellar S2000 sports car. The F20C was used initially, and from just two liters it cranked out 240 horsepower without requiring a turbocharger or supercharger. It did require plenty of revs (8,300!) to make that peak power, but with its smooth delivery and a slick-shifting six-speed manual, keeping it up on the cams was one of the thrills of piloting this agile roadster. For 2004 the S2000 got a slightly larger (2.2-liter) version of that engine, dubbed F22C1, which made its peak power at lower rpm making the car a bit more tractable. 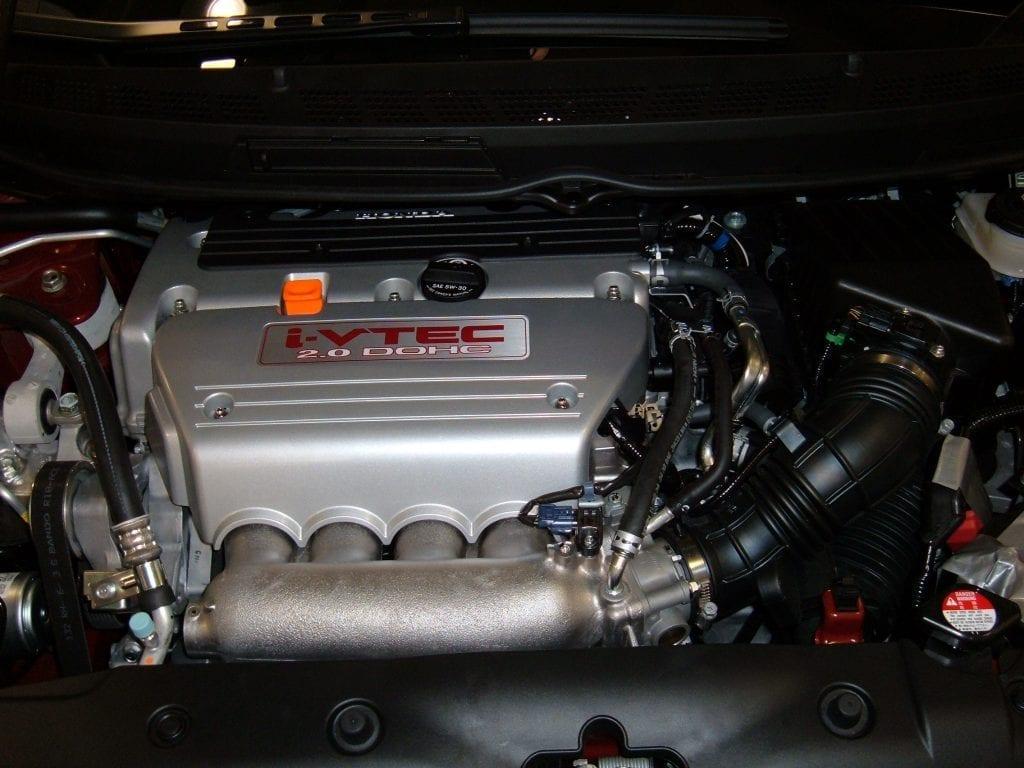 While its looks may be controversial, there’s no question that the 2006-2011 Civic Si packed a brilliant engine, a free-spirited 2.0-liter four zinging out 197 naturally-aspirated horsepower, more than enough to warm your heart. With an 8,000 rpm redline, the K20Z3 loves to rev. Cane it thusly, and you’re rewarded with an added kick in the pants as the VTEC (Variable valve-Timing and lift, Electronic Control) system works its magic. Yes, you have to exercise the six-speed manual to keep the engine on song, but with the Si’s easy clutch and precise shifter, that’s at least half the fun. Great V8s have been a Mercedes hallmark ever since the late 1960s when legendary development chief Erich Waxenberger shoehorned a 6.3 liter M100 into the otherwise sedate 300SEL, inventing the modern Q ship.

A notable peak in their durability, power and refinement came with the M119, Benz’s third V8, which married the cost-no-object engineering of its previous iterations with modern upgrades like an aluminum four-valve-per-cylinder head, forged connecting rods and more sophisticated fuel injection. This V8 was ferocious enough to power the Sauber C9 race cars to a 1-2 finish at Lemans in 1989, yet it is equally at home in a 500SL cruising the back roads on a quiet Sunday afternoon.

The M119 in various forms found its way into pretty much every available MB package in the 1990s — everything from the tank-like W140-generation S-Class to the W124-based 500E, a modern and sublime reinvention of Waxenberger’s original wolf in sheep’s clothing. And, of course, the R129-generation SL, which we’ve argued is one of the best values currently in the marketplace. It would be odd to leave the Porsche flat six off any list of great engines; however, the values of most models with Weissach’s signature power plant are markedly higher than our $25,000 threshold.

Except one: Porsche’s first water-cooled flat six, which debuted in the 1997 Boxster and propagated much of the automaker’s lineup through 2008, when its successor, the MA1, was introduced. As we noted in our 996 buying guide, M96-equipped cars are cheap these days owing to a combination of shade thrown by the air-cooled purists plus its notorious IMS bearing flaw that can result in catastrophic engine failure. The good news is that both can be addressed without too much drama. The purists you can simply ignore. But the IMS bearing upgrade, which you should do if it hasn’t already been done, will cost you about $2000. Once that’s taken care of, you can enjoy one of the best experiences to be had behind the wheel: a raspy flat six pushing you insistently wherever you point the wheel.

Better yet, experts say the best way to ensure your new IMS bearing lasts is to drive the car often and hard. Now that’s some tasty medicine. The EJ255 engine was notably featured in the second and third generation Forester XT, a compact crossover wagon. With a sizzling 5.3-second 0-to-60 time, this family car was quicker than the less-torquey WRX wagon of the same era while providing more space for people and cargo. It’s surprisingly good fun to row your own gears through Subie’s long-throw shifter and encourage the mill’s gruff yet oddly satisfying exhaust note, especially given the car’s grocery-getter image. Should a midsize sedan be more to your liking, this engine is also available in the handsome fourth-gen Legacy GT (2005-2009) as well as in the less attractive fifth-gen Legacy GT, which was discontinued after 2012. And Fast and Furious aficionados can enjoy the motor in the 2006-2014 Impreza WRX.

Fans of the obscure can also seek out this engine in the final year of the Saab 9-2X Aero. The wagon, a slightly gussied up Impreza (lovingly nicknamed the “Saabaru”), was a last-ditch effort by GM to revive the dying Saab brand, but it sold in dismal numbers since you could get essentially the same car at a Subaru dealership for thousands less. If the idea of pairing German refinement with Japanese reliability makes you feel all tingly inside, then you’ll definitely want to experience the 2JZ inline six, which is the byproduct of Toyota engineers trying to out-BMW BMW. While not nearly as formidable as the turbocharged GTE variant, the naturally-aspirated 3.0 GE still packs a punch of about 225 hp and is far less expensive to acquire. Plus, it’s built like a tank with a cast iron block and robust internals that will easily last to 200k miles and more.

If you can find an SC300 with a 5-speed manual gearbox (available through 1997, though rarely selected), snap it up. It’s a highly desirable pairing. If the 2JZ was an attempt to outdo BMW, then the 1UZ was a gauntlet thrown at the feet of the Mercedes-Benz engineers. It astonished the world when introduced in the 1990 Lexus LS400. A sophisticated, lightweight and powerful all-aluminum, quad-cam V8, the compact 4.0 liter design generated an impressive 250 highly-refined horses and over the years was bumped all the way to an even 300 (in the GS400) through various refinements, most notably variable valve timing (VVT-i) in 1998. People of a certain age may recall a TV spot showing an LS spinning a dynamometer to 140 MPH while a stack of champagne glasses sits unperturbed on the hood — a brilliant bit of marketing that helped to draw crowds of S-Class and 7-Series drivers into Lexus showrooms.

These days, five grand buys you one of the nicest LS, GS or SC examples on the planet, a remarkable value for what are still outstanding cars.

With so many superb fours, sixes and eights available in such a wide variety of automobiles — and for surprisingly little cash — there’s simply no good reason not to be driving something with a great engine under hood.

No doubt there are some other interesting choices out there. For your $25,000 or less, what awesome engine would you want powering your ride? Share your thoughts in the comments below.