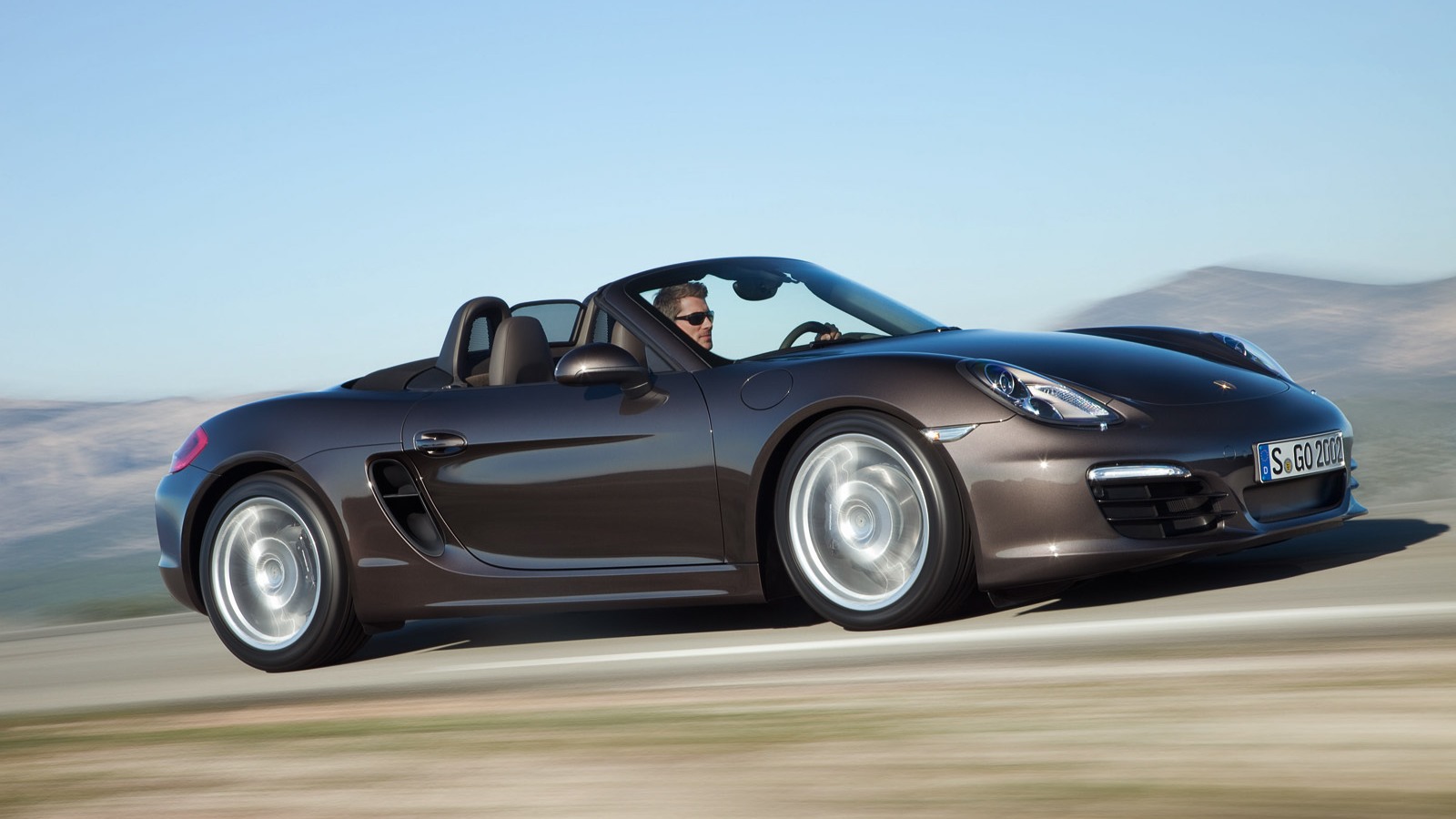 Two seats. Mid engine. Flat six. Manual gearbox. Low price. The formula for Porsche’s entry-level sports car, the Boxster (as well as its fixed-roof sibling, the Cayman), is a great one. It’s made the model, now in its 25th year, a major success story for the German automaker.

The Boxster has changed quite a bit since its 1996 debut — and not always for the better. One of the most significant updates occurred with the current generation, dubbed “982” by Porsche, which first appeared for the 2017 model year. That’s when Porsche swapped its traditional horizontally-opposed six-cylinder engine for a turbocharged flat four. To be fair, the four-cylinder version is still an excellent car. But there’s no doubt some of the original magic has been lost.

The good news is that the previous generation, known as the “981,” represents the best of everything Porsche’s mid-engine sports car has to offer, including a free-revving and sweet-sounding flat six as standard equipment. Combine that with the fact that these cars are now between six and 10 years old, making them more affordable than they’ve ever been, and you have a recipe for a genuine used car bargain. The 981 was a complete makeover of the outgoing version, the 987. All-new sheetmetal by longtime Porsche designer Tony Hatter, who also penned the iconic 993, preserved the basic shape but gave it sharper and more athletic lines. Most would agree: the 981 is a big upgrade over the 987 in the looks department.

And that beauty isn’t just skin deep. The 981’s new body is 40% stiffer than the prior generation’s. While it shares the same basic dimensions with the outgoing car, the 981’s wheels are pushed closer to the extremities for better handling and more interior room. The 981 is slightly lighter, too, thanks to the increased use of aluminum and magnesium in its construction.

The improvements continue inside the cabin, which borrows upscale design elements from Porsche’s full-size grand tourer, the Panamera, giving it an artful balance of style, function, and simplicity.

Porsche also swapped the 987’s traditional hydraulic steering for electric boost in the 981. Normally this would be cause for consternation. But the engineers managed to make the change without losing any of the marque’s trademark steering feel.

In their 981 road test at the time, Car and Driver declared, “Consider this the sports-car enthusiast’s gold standard, rapidly approaching platinum.” The magazine also named both the Boxster and the Cayman to their annual 10Best List each year that the 981 was sold. In base trim, the 981 is fitted with Porsche’s 2.7-liter horizontally-opposed six-cylinder engine mounted amidships. It produces a peak of 265 horsepower and 206 lb-ft of torque and is mated to either a standard six-speed manual transmission or an optional seven-speed automated manual (aka “PDK” in Porsche-speak) routing power the rear wheels. With either ‘box, the naturally-aspirated flat six pushes the two seater to 60 miles per hour in 5.4 seconds, according to the manufacturer.

Opting for the pricier “S” trim gets you a 3.4-liter version of the same engine, making 315 horsepower and 266 lb-ft of torque, backed by the same gearbox choices driving the rear wheels. The S’s additional oomph shaves almost a full second off 0-60 times compared to the base model.

For the 2014 model year, Porsche added the high-performance “GTS” trim to the 981. It features a slightly modified version of the S’s 3.4-liter flat six, upping output around 5% to 330 horsepower and 273 lb-ft of twist. The GTS also adds a host of other desirable upgrades, which we’ll discuss in more detail below.

If that isn’t powerful enough for you, two special editions of the 981 up the ante considerably. Both the Cayman GT4, which first appeared in 2015, and the Boxster Spyder, which debuted a year later (as a final-year-only model), borrow a 3.8-liter flat six from their bigger brother, the 911 Carrera S. In the GT4, it’s capable of 385 horsepower and 309 lb-ft of torque, while in the Spyder it produces the same torque figure but 10 fewer ponies. In either car, only a six-speed manual was offered.

Before you get too excited, though, we should note that both special edition 981s were produced in limited numbers. Porsche made around 2500 of each, with less than half that number coming to the US. As a result, they’re somewhat rare and very much pricey. Most for sale these days fetch $100,000 or more, which is collector car money. Considering that the base 981 Boxster started around $50,000 when new, it’s not too surprising that it came fairly well equipped. Standard features include 18-inch wheels, a power-folding soft top, cruise control, six-way adjustable seats, air conditioning, and a Bluetooth-enabled audio system.

The S trim originally stickered for about ten grand more. In addition to a larger 3.4-liter engine, that extra cash bought you 19-inch wheels, red-painted calipers, bi-xenon headlights, and an upgraded seven-speaker stereo.

In typical Porsche fashion, the available options list was exhaustive. Among the more popular choices: the Convenience package, which bundles heated seats, dual-zone climate control, and a wind deflector, and the Premium package, which adds adaptive headlights, 10-way power seats, and navigation.

On the sporting front, Porsche offered two desirable add ons. The Sport Chrono package includes launch control (with the PDK transmission only), adjustable chassis settings, dynamic transmission mounts (which help to stiffen the structure during spirited driving), and a lap timer. Also available was an adaptive suspension, which the manufacturer calls Porsche Active Suspension Management (PASM). It allows the driver to select a suspension stiffness to match the occasion, whether it’s a Sunday cruise or a day at the track.

For 2014, Porsche bundled those last two options — plus 20-inch wheels, a sport exhaust, and a slightly more powerful version of its 3.4-liter flat six — to create the GTS trim. Its MSRP was well over $70,000, and it remains a highly enticing 981 spec today.

For the 981’s final year, Porsche introduced the Black Edition. Starting with the base 2.7-liter car, it adds a host of popular features, including 20-inch wheels, adaptive xenon headlights, heated seats, dual-zone climate control, a sport steering wheel, front and rear parking sensors, navigation, and a seven-speaker audio system. Think of it as the 981’s luxury version. The 981 didn’t change very much during its four-year production run (2013-2016). But here are some notable highlights.

Porsche adds the high-performance GTS trim, supplementing the base and S models.

The limited-production Cayman GT4 (pictured above) rolls out, featuring the 385-hp flat six from the 911 Carrera S in addition to a host of other performance upgrades.

The one-year-only Boxster Spyder launches. Like the Cayman GT4, it boasts a 3.8-liter flat six and tons of additional go-fast hardware. Confirming its track-ready nature, air conditioning and a radio are both optional.

Also appearing for the first time: the Black Edition, which adds a variety of luxury upgrades to the base Boxster or Cayman.

There are no other changes to the 981 in its final year. 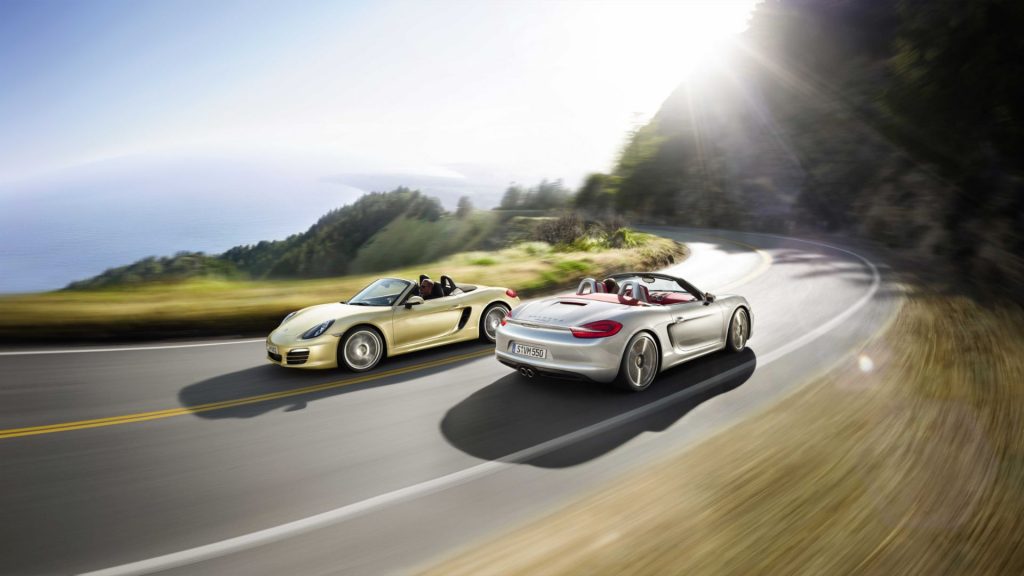 Fortunately, the 981-generation Boxster and Cayman models don’t suffer from the common ailments of preceding generations, such as failing IMS bearings or cylinder scoring. In fact, in researching this article, we’ve been hard pressed to uncover any significant concerns (other than a recent recall for which the fix is covered by the factory). Perhaps this is why Porsche in recent years has consistently been named among the most reliable automakers, including the top ranking in dependability from JD Power during the period when the 981 was sold.

As with any used car, you’ll want to seek out only well-cared-for examples, which have been serviced on time and at a Porsche specialist. We recommend shunning any cars with significant accident repairs or other major bodywork in their past. That’s because the integrity of the car’s structure can be compromised as a result of a hard hit and/or major metalwork. Also, repainted panels tend to wear faster and less evenly than those with factory original paint. There are unblemished specimens out there, so it’s best to move on should you find evidence of this sort of damage.

Also, before you spend thirty grand or more on a used 981, we highly recommend hiring a Porsche specialist to evaluate it. For about $250, they’ll provide you with a thorough inspection of the entire car. This can reveal potentially deal-breaking issues, such as excessive engine or suspension wear, or minor things that you can use as bargaining points, like worn brake pads or aging tires. Either way, it’s easily worth the money to complete a professional inspection prior to finalizing any used car purchase. A variety of factors has conspired to keep 981 prices relatively high on the used car market. One is that Porsche only made the 981 for four years and only sold around 5000-7000 units per year (both Boxsters and Caymans). So they’re not exactly abundant. Another is that, as we’ve mentioned, the 981 is the last generation to offer a flat-six engine as standard equipment. Plus, as noted above, the 981 has so far proved to be one of the more reliable used sports cars you can buy. And, of course, they are simply outstanding to drive.

Still, depreciation has done a bit of work over the last few years, dropping values around 25-40% from new for the most common 981 variants, including the base and S models. Prices for rarer versions, though, such as the Cayman GT4 or the one-year-only Boxster Spyder, have actually gone up.

Generally speaking, it takes around $35,000 to $40,000 to buy a truly excellent used 981 — something like this well-equipped, one-owner 2013 Boxster with just under 50,000 miles, which is listed for sale by a dealership in Tennessee for $39,926. We’d love to have that one in our garage. Considering that’s about the same amount as a new Miata with the Brembo package, we think this is a very good value. And the 981 is likely to retain its value far better than any other sports car in this range.

If you have your heart set on a S or even a GTS, you’ll have to pony up a little more, though. A well-kept 981 Boxster S with about 50,000 miles will set you back $50,000 to $55,000, while a similar GTS is typically going to cost another ten large. If you have the bucks, by all means go for it. But we think most buyers, short of those who spend their weekends at the track, will be just as happy behind the wheel of a base 981.

Over $70,000 buys you a barely-used (under 10k miles) Boxster or Cayman S loaded with features or an outstanding GTS with less than 25,000 miles on the clock. At this price point, though, you might want to consider stepping up to a used Porsche 911 instead.

That is, unless you really want to get your mid-engine fix. Which we’d totally understand.