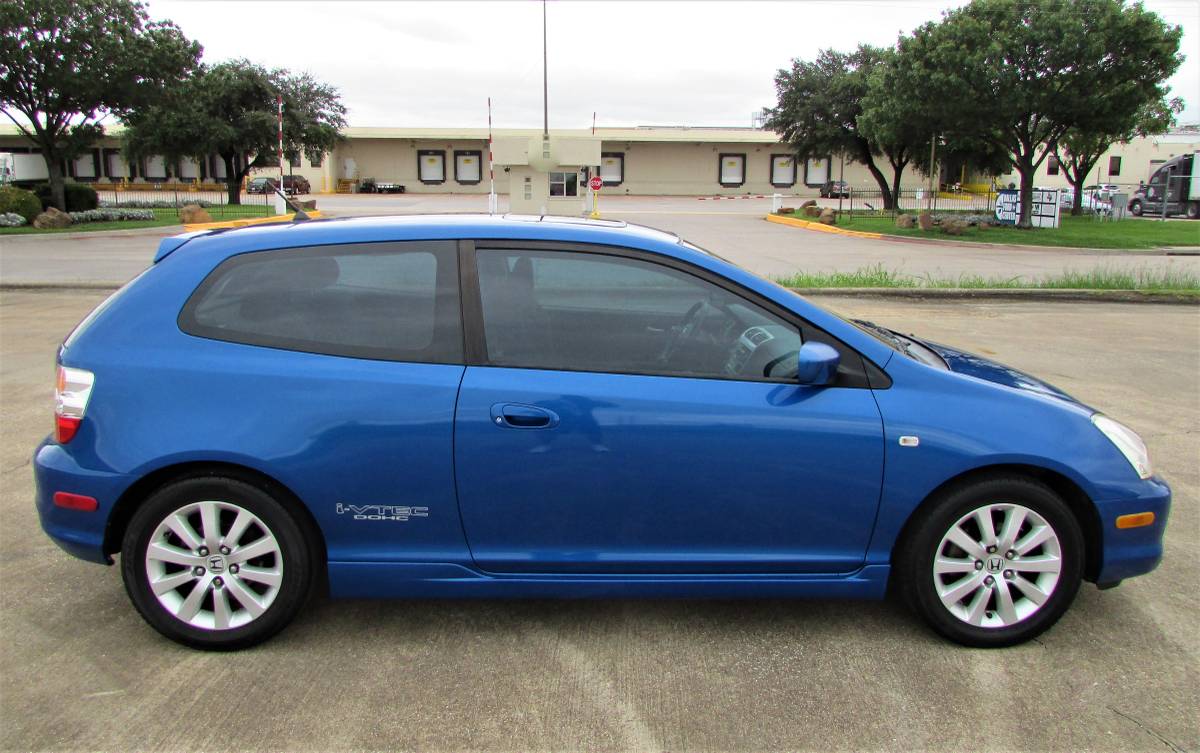 The seventh generation Honda Civic debuted for the 2001 model year (in the US). However, the Si performance variant didn’t appear for another two years. Unlike other US versions of the Civic, the Si was built in Swindon, England, and its two-door hatchback body style, dubbed EP3, is unique to the trim.

Though the styling at the time was derided as a “mini Odyssey,” we think its simple shape today looks distinctive and purposeful — and it’s especially attractive in this bright color, which Honda calls Vivid Blue Pearl.

Of course, the real star of the show in any Si lies under the hood. There you’ll find the same 2.0 liter four cylinder VTEC engine that powers the Acura RSX, putting out 160 hp though a 5-speed manual gearbox (the only available transmission for the Si).

While its 6800 rpm redline disappointed fans of the prior generation Si, which revved to 9000, this new Si engine (K20A3) did offer substantially more torque, adding nearly 20 lb-ft for 132 total, making it a bit more tractable in everyday driving.

The shifter position, jutting out of the dash instead of down into the floor, was somewhat controversial, but many drivers have praised it for falling easily to hand from the steering wheel, not to mention its precise S2000-like action. All in all, the EP3 generation Si swings more toward the practical side of the hot hatch spectrum (versus pure sports car). In its road test at the time, Automobile editor Ezra Dyer called it “an economical, usefully packaged everyday driver with a dose of driving excitement hidden at the high end of the tach.” Think of it as the Japanese GTI.

This particular specimen is a very well-kept, all-original example with just two owners from new, plus a clear vehicle history report and relatively low miles (94k). Though the asking price of $6950 is considered high by KBB’s estimates, we think it’s fair considering the condition and spec.

It may not be the most desirable generation of Civic Si, but for a practical, fun, and reliable daily driver, it sure looks like a good buy to us.